xxxxxThe Danish writer Hans Christian Andersen published the first of his many fairy tales - 168 in total - in 1835. Written in an attractive style and full of childlike fantasy and wonder, they included such stories as The Ugly Duckling, The Little Mermaid, The Snow Queen, and The Emperor’s New Clothes. Some were inspired by folklore, but most were original works based on his own, somewhat deprived childhood. As a result, not all had happy endings, and there was often a stark lesson to be learnt. They proved immensely popular among children, and were translated into more than 80 languages. He also wrote novels and plays, and his extensive journeying around Europe and parts of Africa provided material for his travel books. On a visit to England he met and became friendly with the novelist Charles Dickens. 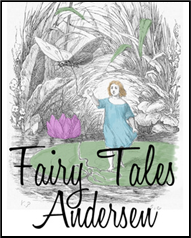 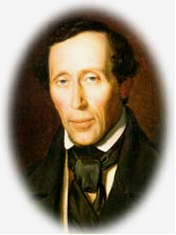 xxxxxIt was in 1835 that the Danish writer Hans Christian Andersen wrote the first four of his famous fairy tales under the title Tales Told for Children. By the time he had finished his series of collections in 1872 he had produced 168 stories, among them being The Ugly Duckling, The Little Mermaid, The Snow Queen, The Emperor’s New Clothes, The Little Fir Tree and The Steadfast Tin Soldier. They were attractively written and full of childlike fantasy and wonder, and, unlike earlier story tellers, like the Brothers Grimm and Charles Perrault, he did not depend on rewriting old material. Some were based on folklore, but the vast majority were original, and leaned heavily upon his own deprived childhood. As a result, not all had happy endings, and there was often a stark lesson to be learnt. These combined elements, and his unique style, gave his tales a universal appeal which crossed over cultural boundaries. They were translated into more than 80 languages, many in his own lifetime, and, subsequently, they have been adapted for plays, films and ballets. 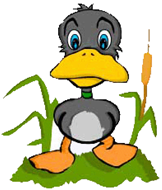 xxxxxAndersen was born into a poverty-stricken family at Odense on the island of Fyn. A lonely, shy child, his parents gave him what help they could, and he would play for hours with a little puppet theatre made for him by his father. At the age of 14 he left home to try his hand at acting and dancing at the Royal Theatre in Copenhagen. He was found to have no talent in either direction, but one of the theatre’s directors recognised his potential and raised money for his education. He attended the grammar school at Slagelse, where he was seen as an odd-ball by both his masters and fellow pupils, and from there he obtained a place at 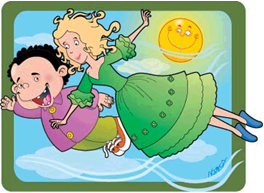 Copenhagen University in 1828. He gained recognition with his tale of fantasy the following year - A Walk from Holmen's Canal to the East Point of the Island of Amager - and this launched him on a literary career. He had some success on the stage, notably his play condemning slavery, The Mulatto, and he produced six autobiographical novels, the best-known being The Improviser of 1835 and his Only a Fiddler, two years later. It was his fairy tales, however, which were to bring him everlasting fame.

xxxxxFrom 1840 he travelled widely in Europe and the Mediterranean, as well as visiting parts of Africa, and this supplied him with the material for a number of travel books. It was at this time, during a stay in England, that he met and became friends with Charles Dickens. Soon after this meeting the English novelist began work on David Copperfield, and some have suggested that the character Uriah Heep was based on Andersen - hopefully for his appearance alone.

xxxxxToday, Andersen’s novels, plays and travel books are little known outside of Denmark, but his fairy tales have been read and loved throughout the world, making him the recognised master in this particular genre. In 1867, by then a state councillor and a professor, he was granted the freedom of his home town Odense. The ugly duckling had indeed become a swan. The humble house where he grew up as a boy is now a museum in his honour. 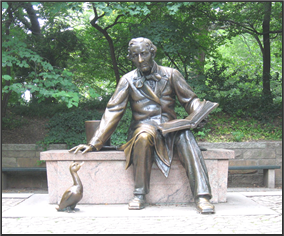 xxxxxIncidentally, there is a bronze statue of Andersen in Central Park, New York City, showing him seated on a park bench, an open book on his lap and the ugly duckling at his feet (illustrated). Apparently it was specially made so that young children could clamber all over it! ……

xxxxx…… Andersen never married and, whilst he had a number of friends, his life was often lonely. However, later, in his The True Story of My Life, he wrote “Life itself is the most wonderful fairy story”.