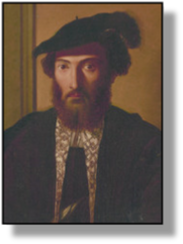 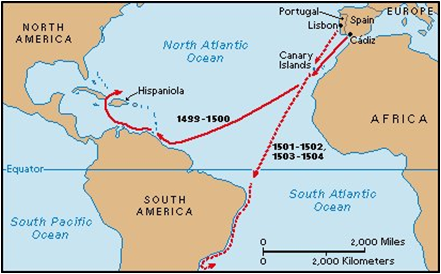 navigator Amerigo Vespucci claimed to have made four voyages to the American mainland and, furthermore, that on his first expedition (1497-98) he reached the North American mainland ahead of any other explorer. Some doubt has been cast upon this claim and, indeed, the likelihood of the voyage itself, but it is generally accepted that in 1499 an expedition undertaken by him for Spain, and led by the Spanish soldier Alonso de Ojeda, did explore a large area of the north coast of what is now South America, and then did go south to discover the mouth of the River Amazon. Vespucci returned believing, like Columbus before him, that he had reached the outlying lands of Asia. During his voyage of 1501, however, in which he again explored the east coast of South America - this time on behalf of Portugal - Vespucci became slowly but surely convinced that the coastline he was tracing was not that of Asia, but that of an entirely new continent. 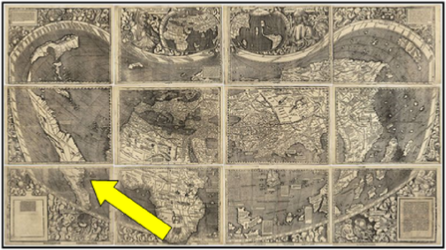 German map-maker Martin Waldseemüller (c1470-c1520), when he came to translate Vespucci's account of these expeditions in 1507, suggested that it would be fitting to name these new lands after the Florentine explorer. The name Amerigo gradually came into use, and when Waldseemüller published a planisphere in 1516 with a picture of Vespucci covering the northern as well as the southern part of the New World, the American continent was literally “on the map”. 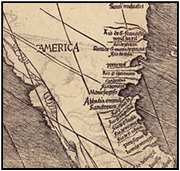 map of 1507 (illustrated above), the first to have the name America on it (shown by an arrow and detail on right), and the first to show the Americas as a distinct continent, was so immense - 4 by 8 feet - that it had to be printed on 12 sheets. One thousand copies were produced by the use of woodcut blocks, but only one copy has survived, and this is held in the Library of Congress in Washington. Waldseemüller also produced a small globe and wrote the treatise Introduction to Cosmography, the work containing Vespucci's account of his voyages. His planisphere called the Carta Marina, produced in 1516, was lost until 1906, when a single copy was found in a castle in Wurttemberg.

xxxxxIt is almost certain that before starting his career as an explorer Vespucci would have known Columbus. From 1491 he worked for a merchant in Seville who fitted out ships sailing to the West Indies. He would have seen him return from his voyages and consulted with him concerning supplies for his next expedition. After his seafaring days were over, Vespucci was again employed in the service of Spain. He was appointed the country's master navigator, and helped to prepare men and ships for new expeditions. 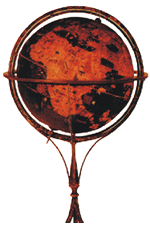 terrestrial globe to survive was made at Nurnberg by the Portuguese navigator and geographer Martin Behaim (1459-1507). At one time he was the advisor on navigation to his monarch, King John II, and he also claimed to have been a pupil of the astronomer Regiomontanus, and to have sailed down the west coast of Africa with Diogo Cao. He began building his globe with the help of a painter, one Georg Glockendon, basing his work on the writings of the Greek astronomer and geographer Ptolemy, and on medieval writers such as Marco Polo. When completed in 1492, it was surprisingly inaccurate considering the information then available, nor was it well-timed having regard to what was lurking just over the western horizon!

xxxxxOne of the most informative 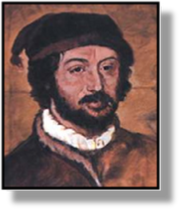 maps of this period was that by the Spanish cartographer Juan de la Cosa (c1460-1510). In 1500 he produced a map showing the discoveries made by Columbus, Cabral's point of landing in Brazil, Vasco da Gama's voyage to India, and Cabot's first expedition to the east coast of North America. The first map to show the new continent (illustrated below), it was lost for many years but eventually discovered in a private library in Paris in 1832. It was brought to the knowledge of the naturalist Alexander von Humboldt, and is now housed in the Naval Museum in Madrid. 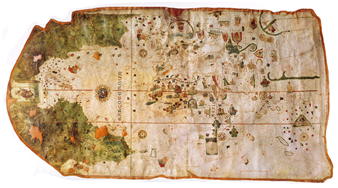 an adventurous life. He accompanied Columbus on his first and second voyages, and in 1499 he took part in Vespucci's voyage to explore the north coast of South America, led by the Spanish soldier Alonso de Ojeda. It was after this voyage that he produced his world map. In 1510 he again went on an expedition led by Ojeda, this time to explore another part of the northern coast of South America. The enterprise ended in disaster. They landed safely in modern Colombia, but were attacked by hostile Indians, and the entire party was massacred save for Ojeda and one other man.

xxxxxThere is some doubt about the number of voyages made by the Florentine navigator Amerigo Vespucci, but it is generally accepted that he explored the north coast of South America in 1499 and that in 1501, during a second voyage to this area, he became convinced that the coastline he was tracing was that of a new continent. It was the German cartographer Martin Waldseemüller who, in his planisphere of 1516, put the explorer's name across the new continent and gave it its name.