xxxxxIt was in 1879 that an amateur archaeologist named Marcelino de Sautuola discovered some remarkable prehistoric wall paintings in a cave at Altamira in northern Spain. He obtained the assistance of Juan Vilanova y Piera, an archaeologist at Madrid University, and he confirmed that they were stone-age images. They published their findings, complete with accurate drawings, in 1880, but because the paintings were so well preserved and the artistic quality was so good, they were rejected by the specialists of the day. It was not, in fact, until 1902, fourteen years after Sautuola ‘s death, that they were accepted as genuine. The cave paintings date from around 13,000 B.C., and the most spectacular cover the ceiling of a side cavern, now known as the “Sistine Chapel of Paleolithic Art”. Depicting a herd of bison, plus two horses and a wild boar, these paintings are remarkable for their vibrant colour - red, black and ochre - and the skill by which the artists have created depth and movement by varying the tone of the dyes and using to good effect the contours of the rock face. Some paintings are simpler in style, and the many drawings and etchings include a variety of handprints and some abstract symbols. Some of the deeper chambers contain a large number of engraved and black-painted figures. The purpose of this art work is unknown, but it probably formed part of a hunting ceremony. 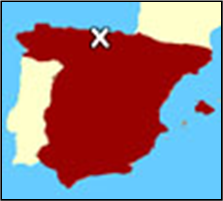 xxxxxIt was in 1868 that a local hunter named Modesto Peres stumbled by chance upon a large cave situated on the hill of Altamira near Santillana del Mar, close to the north coast of Spain. Herdsmen and other hunters had often used the cave for shelter, but it was he who noticed some outlined tracings on the walls near the entrance and told others of his find. However, it was not until 1875 that the nobleman Don Marcelino de Sautuola (1831-1888), the owner of the area around the cave and, as it so happened, an amateur archaeologist, began visiting the cave complex. In addition to some black wall paintings, he discovered a quantity of archaeological remains, including a variety of flint implements, a large number of animal bones (some engraved), and what appeared to be ceremonial staves. But it was not until one day in the summer of 1879 when he was accompanied by his five-year old daughter Maria, that the “polychrome ceiling” was revealed. Having wandered a little further into the cave, she drew her father’s attention to the colourful pictures of “bulls” (bison in fact) which covered the roof of an adjoining cavern. The “Sistine Chapel of Paleolithic Art” had at last been discovered. 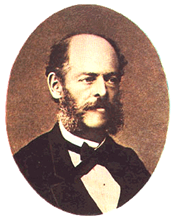 xxxxxHaving attended the World Exposition in Paris the previous year, where he had seen similar images engraved on stone-age objects, Sautuola (here illustrated) then sought the advice of Professor Juan Vilanova y Piera, an archaeologist at the University of Madrid. After a careful study of the drawings, Piera became convinced that they were genuine cave paintings of the Old Stone Age. Together they compiled a book of their findings, complete with accurate drawings of the paintings, and this was published in 1880 under the title Brief notes about some prehistoric objects of the Santander province. It attracted a deal of interest, but it was not taken seriously. Due to the remarkable artistic quality of the paintings and the excellent state of their preservation, the scientific world was in no way convinced. A number of Spanish and foreign specialists, including the eminent French anthropologist Gabriel de Mortillet, regarded the images as fakes, and the leading French prehistorian Émile Cartailhac even spoke of forgery. As a result their findings were rejected and publicly ridiculed at the Prehistorical Congress held at Lisbon later that year. It was not, in fact, until 1902 that, having been able to compare the findings at Altamira with the discovery of other prehistoric art work, the wall paintings were accepted as authentic.

xxxxxThe Altamira Cave is some 270 metres long and, beyond the entrance hall, is made up of twisting passages and a number of side caverns. The chamber that contains the magnificent prehistoric paintings and engravings, executed some 14,000 to 16,000 years ago, is oblong in shape, about 18 by 9 metres in size, and with a roof varying in height from two to six metres. It is here that the ceiling is covered with paintings of animals, most of them depicting bison but also including two horses, a deer, and what appears to be a wild boar.

xxxxxThese paintings are nothing short of breath-taking. The three colours used for many of the figures - red, ochre and black - were made from charcoal and pounded minerals, and probably mixed with animal blood or fat. Rubbed on the surface or blown on by a tube, these have remained amazingly brilliant. And it would seem that in many of these paintings the artist made a deliberate attempt to give the figures a three-dimensional effect by diluting the dye or slightly scratching away the rock surface to vary the depth of the colours. This chiaroscuro technique, together with a sophisticated use of the natural contours of the rock face, combine to give the animals both life and movement. When one considers what these artists did not have in the way of materials and instruments, they showed an amazing degree of skill both in the life-like detail they accomplished and the illusion of depth they created. 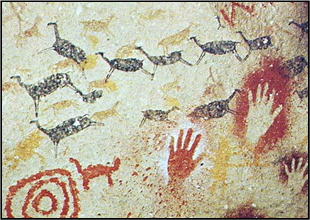 xxxxxSome paintings are simpler in style, and the many drawings and etchings include a variety of handprints and hand outlines, a sequence of symbols which are abstract in form and meaning, and an assortment of anthropomorphic figures, such as human bodies with animal heads. Other chambers contain a large number of engraved or black-painted figures.

xxxxxThe purpose of these cave paintings is not known. Some observers have suggested that they were simply a means of decoration, the products of a leisure activity, or even the graffiti of the Paleolithic Age. Such ideas are most unlikely. The art work was done in gloomy recesses and in cramped, difficult conditions, hardly places in which to pass one’s leisure hours. Because of the preponderance of animal figures it might well be that the paintings formed part of some hunting or religious ritual in which thanks were offered up for the wildlife upon which early man depended. Another theory is that they were part of an initiation ceremony. They were clearly produced over a number of years so this is a possibility. 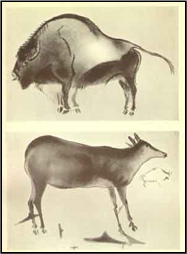 xxxxxBut for whatever purpose they served, these paintings were the first of this type of Paleolithic art to be discovered. Since 1879 several hundred sites of cave art have been found, particularly in France and other parts of Spain, but none save one has come up to the size and excellence of the mural works found at Altamira. Thexone site that compares favourably with Altamira is the Lascaux grotto in the Dordogne, south-west France. Discovered in 1940, this has a larger display of art work from the same period, but after being opened to the public the paintings deteriorated rapidly and the cave had to be closed in 1963. A facsimile was opened nearby twenty years later. (The illustrations here show the remarkable talent of these stone-age artists.)

xxxxxIncidentally, when, in 1902, it was finally agreed that the paintings at Altamira were genuine, the French prehistorian Émile Cartailhac (1845-1921), who had even suggested forgery at one time, had the good grace to admit his mistake in an article in the journal L’Anthropologie entitled Mea culpa d’une sceptique. Unfortunately this was no comfort for Marcelino de Sautuola. He had died in 1888. ……

xxxxx…… The reason why the paintings were in such an excellent state of preservation when discovered in 1879 (and thus made the experts sceptical) is put down to the fact that a rock fall some 13,000 years ago sealed up the cave. It was only in recent years - possibly in the early 19th century - that a tree came down near the site and displaced some of the rocks in front of the entrance. To prevent damage to the art work, visiting is strictly limited, but in 2001 a replica cave and a museum were opened close by. Altamira (meaning “high view” in Spanish) was declared a world heritage site by UNESCO in 1985. ……

xxxxx…… A number of artists have been influenced by the Altamira cave paintings, including the Spanish cubist painter and sculptor Pablo Picasso. He visited the cave and afterwards made his famous remark: “After Altamira all is decadence”. ……

xxxxxInx1868 the French geologist Louis Lartet (1840-1899) investigated five skeletons which had been found by workman in a cave at Cro-Magnon in the Dordogne area of southern France. Buried alongside stone tools, ivory pendants and an assortment of shells, these human bones proved to be between 10,000 and 35,000 years old and virtually identical in form to modern man. Named Cro-Magnon man, this term describes the first homo sapiens in Europe, the very toolmakers, hunters and artists who decorated caves like those at Altamira and Lascaux.