xxxxxFollowing the humiliating defeat of Russia in the Crimean War, the new Tsar, Alexander II (1818-1881), embarked upon a vast programme of political and social reforms. Prime amongst these was the emancipation of the serfs in 1861. Some 23 million peasants were granted their personal freedom, together with a plot of land. The process, however, was slow and complex, the land allocation proved too small, and each peasant was obliged to pay for it by means of a redemption tax. As a result, many remained second-class citizens, and a large number sought industrial employment in the cities. In addition, the move was strongly opposed by the landowning classes. Other reforms included greater political power to local authorities, an overhaul of the judicial system, and steps to modernize the army. But these measures, sound in themselves, proved insufficient to satisfy the demands of the revolutionaries and, faced with mounting opposition, Alexander was forced to re-impose a reactionary regime by the late 1860s. In foreign affairs he met with greater success. He occupied land in the Caucasus and central Asia, and eventually triumphed in the Russo-Turkish War of 1877 (Vb). But his crushing of the Polish rebellion of 1863-64 incited the radicals at home, and he lost much public support when the favourable terms gained following the defeat of the Turks were substantially reduced by the Congress of Berlin in 1878 (Vb). Three years later an assassination attempt on his life, the last of many, proved successful. Russia now seemed firmly set upon the road to revolution.

THE EMANCIPATION OF THE RUSSIAN SERFS 1861  (Va) 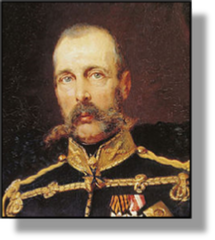 xxxxxIn the wake of Russia’s defeat in the Crimean War there was an urgent need for drastic political and social reform. Alexander II (1818-1881), who had succeeded his father Tsar Nicholas in 1855 and been obliged to sign the humiliating peace treaty of 1856, was determined to improve the standing and the welfare of his vast country. His first major step in that direction was the abolition of serfdom in February 1861, an act which his predecessor Catherine the Great had advocated but later, fearing the consequences, had never put into practice. At a stroke Alexander gave personal freedom to no less than 23 million of his subjects. 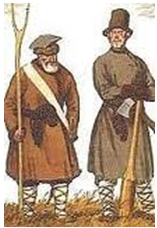 xxxxxIn the long term, the Emancipation Act was a vital step towards the ultimate modernisation of Russian society, but in the short term it came at a high price. It was carried out in the face of bitter opposition from the landowning classes - already stressed economically - and the slow and complicated process required to implement it did little to satisfy the revolutionary movement which was gaining in strength throughout the country. In addition to their freedom, the peasants were granted allotments of land, but these proved inadequate in size, and had to be paid for by a redemption tax levied over many years. As a result, many remained tied to the land and, apart from an enterprising minority, became impoverished second-class citizens, denied basic political rights. In addition, many left the land and joined the growing force of factory workers in the cities. Any hopes of establishing a class of peasant farmers bent on creating their own wealth were quickly dashed.

xxxxxOther reforms put in motion by Alexander was the creation of elected assemblies at local and provincial level, the overhaul of the judicial system - long overdue - , and the introduction of a six-year compulsory period of military conscription to replace the outdated method of recruitment and training. And alongside these changes went a more liberal attitude towards dissent. Exiles were allowed to return, a large number of political prisoners were released, and foreign travel was permitted. Furthermore, economic development was given an immense boost by an extensive programme of railway construction. At the end of his reign close on 14,000 miles of track had been built and was in operation. 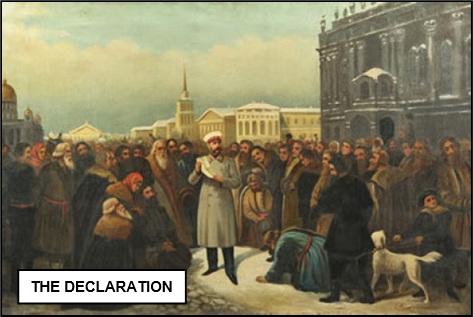 xxxxxThis programme of Grand Reforms brought about some marked improvements, particularly in local welfare and the national economy, but changes to the status quo were closely monitored by central government, and in judicial matters the ultimate decision remained with the emperor. Furthermore, faced by an ever growing militant demand for social and political reform, Alexander, the erstwhile “Liberator”, began to lack the courage of his own convictions. In the face of rising opposition, a series of attempts upon his life, and the serious lack of an efficient class of administrators, he became increasingly autocratic. Under the guidance of Konstantin Pobedonostsev - his chief advisor and tutor to his son and heir - a reactionary regime was slowly but surely re-imposed. This led to the eventual assassination of Alexander in 1881, and served only to hasten Russia’s inevitable slide towards revolution.

xxxxxIn foreign affairs Alexander’s reign was more successful. He extended his authority over the Caucasus and much of central Asia, founded the city port of Vladivostok in the Far East, and, after early setbacks, emerged victorious in the Russo-Turkish War of 1877 (Vb). Nevertheless, his brutal suppression of the Polish rebellion of 1863-64 aroused further opposition from radicals at home, and in 1867, his sale to the United States of the area now known as Alaska proved imprudent. Furthermore, he lost much public support when the favourable terms gained at the Treaty of San Stefano (which ended the war with Turkey), were substantially reduced by the Congress of Berlin in 1878 (Vb). 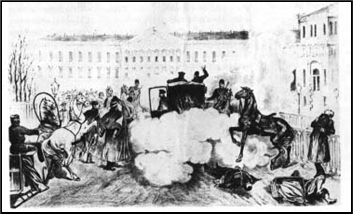 xxxxxIncidentally, attempts to assassinate Tsar Alexander II, beginning in 1866, included a number of shootings, the derailing of his train, and the blowing up of the Winter Palace in St. Petersburg. He was eventually killed in 1881 by a bomb which was thrown into his carriage by a member of a revolutionary organisation known as “The People’s Will” (illustrated). This was a break-away movement from Narodnism (Populism), an organisation whose middle class members argued that the freed serfs were being sold into “wage slavery”. Active during the 1860s and 1870s, the main aim of its members, the Narodniks, was to convert the peasantry to a modified form of communism. But they found it difficult to relate to the peasants, were constantly hounded by the secret police, and were almost obliterated when their revolt of 1877 was brutally crushed. However, their ideas survived, and helped to pave the way for the Russian revolutions of 1905 and 1917.

xxxxx……  By the time Alexander II came to power in 1855, the Russians had already established control over the peoples of Kazakhstan in central Asia, and discovered the straits between the island of Sakhalin and the mainland of Asia.