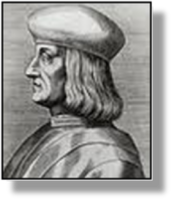 Italian printer and scholar Aldus Manutius established a printing business in Venice (the Aldine Press) with the aim of publishing cheap but good quality editions of Greek and Latin classics. Known as the Aldine Editions (or simply Aldines) these small, pocket-sized volumes quickly gained a reputation for their attractive typeface and the accuracy of their text. In this series he was the first printer to use italics and small capitals, and his work was also noted for the use of original woodcuts. 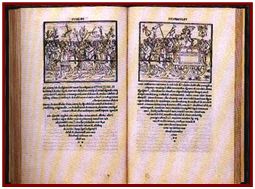 family printing firm, established with the financial support of the Prince of Carpi, was in business for just over a century and helped to make Venice the publishing centre of Europe. It closed down following the death of his grandson, Aldus Manutius the Younger, in 1597. During its existence, the house published close on 1000 editions. Among these was one of the outstanding achievements of the Italian Renaissance, the production of a fantasy work by the Italian monk Francesco Colonna (c1433-1527) entitled Hyperneromachia Poliphili (The Strife of Love in a Dream). The book, printed in 1499, contains no less than 172 finely produced woodcuts - all by an unknown artist - and the text is embellished with floriated initials. 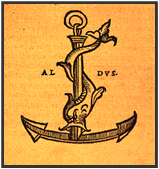 xxxxxIn addition to his printing firm, Manutius also founded an academy for classical scholars for the purpose of editing ancient Greek texts. Known as the New Academy it was established around 1500 and included among its members Desiderius Erasmus. Here in about 1506, using the Aldine Press, the distinguished Dutch scholar expanded his collection of Greek and Latin adages into the monumental work that first made him famous.

xxxxxIncidentally, the trademark of the Aldine Press, shown here, depicted a dolphin and an anchor. It represented the Aldine motto Festina lente (Make haste slowly).

xxxxxThe Italian printer Aldus Manutius set up a printing press in Venice in 1495 (the Aldine Press) to produce cheap but good quality editions of the Greek and Latin classics. These excellent editions were the first to use italics and small capitals. This family firm survived until 1597, and published nearly 1,000 volumes, many with floriated initials and original woodcuts. Manutius also established the New Academy in about 1500 to edit ancient texts. Among its members was the distinguished Dutch scholar Desiderius Erasmus.