xxxxxThe Portuguese navigator Antonio de Saldanha was the first European to anchor in Table Bay - then sparsely populated -, arriving early in the 16th century. Then in 1647 survivors from a Dutch ship wrecked in the bay were impressed with the location, and the Dutch East India Company set up a station there in 1652 to assist their ships travelling to and from the Far East. Under its founder Jan van Riebeeck the settlement flourished, and, with the arrival of slaves, farms and vineyards were established. Later, as we shall see, the Dutch farmers (or Boers) pushed inland and in 1779 (G3a) started a series of wars with their Bantu neighbours. Eventually, to avoid the British, they trekked further into the interior, and established their own territories, the Transvaal and the Orange Free State.

xxxxxThexPortuguese navigator Antonio de Saldanha was the first European to anchor in Table Bay and climb Table Mountain. Arriving there in the early part of the 16th century he found only a few hundred natives inhabiting the area, living by hunting and herding. (The Bay of Saldanha, some 65 miles north of Table Bay, was later named after him). Then in 1647 a Dutch vessel, the Haarlem, was wrecked in the bay, and the survivors were so impressed with the region and the willingness of its people to barter, that the Dutch East India Company decided to set up a permanent station there to assist their vessels travelling to and from the Far East, and with the hope of extending trade into the interior. 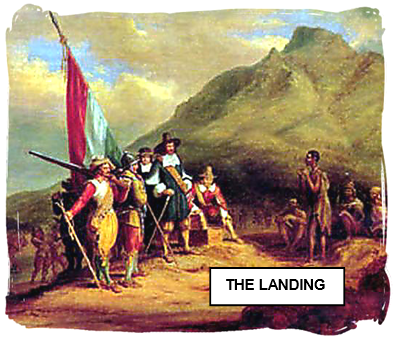 xxxxxInxApril 1652 Commander Jan van Riebeeck and 125 men arrived at the Cape (illustrated) and set about the task of building a fort and growing crops. The settlement quickly began to expand and in 1657, on the advice of Riebeeck, a number of company servants were released from their employment in order to become farmers and expand the cultivation of the land on the company's behalf. The following year the first shiploads of slaves began to arrive in the station. This enabled the establishment of a second farm at Newlands, inland from Table Mountain, and vineyards were set up on the slopes of Wynberg (Wine Mountain).

xxxxxOver the fourteen years that Riebeeck was commander, the area developed at a pace. A fort was constructed, together with a mill and a hospital, and to ensure the safe landing of supplies, a jetty was built for visiting ships. And, seeing the need for the settlement to be self sufficient, he encouraged the development of fishing, whaling and sealing, the growing of food crops, and the keeping of livestock. This was no longer an outpost of the Dutch East India Company – this was a nation in the making. 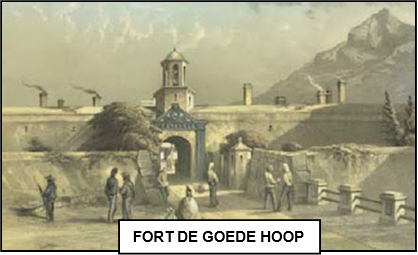 xxxxxApart from the Portuguese trading stations in Mozambique and Angola - where the climate was not well suited to Europeans - the Dutch development at the Cape of Good Hope was the only other area of European settlement in South Africa in 1652. The Dutch pioneers who arrived at that time were the first Afrikaners (or Boers) to settle in what is now known as Cape Province. Later, as we shall see, they pushed into the interior and in 1779 (G3a) began the first of a series of conflicts with their Bantu neighbours, known as the Kaffir or Cape Frontier Wars. Eventually, to avoid coming under British rule, they trekked inland in the late 1830s and established two independent states, the South African Republic (later the Transvaal) and the Orange Free State. 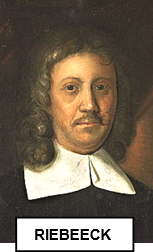 xxxxxIncidentally, a statue of Riebeeck, the founder of the colony, stands today in Cape Town. Nearby is a statue of his wife, Marie. She gave birth to no less than sixteen children and it is hardly surprising, therefore, that she is shown expecting a child. This is believed to be the only statue in the world of a pregnant woman.

Six years after they began to settle at Table Bay, the Dutch also completed their conquest of Ceylon, expelling the Portuguese from Jaffnapatam, their last possession on the island. In South America, however, it was a different story. In 1654 the Dutch were finally driven out of Brazil by the Portuguese.