THE SAFAVID DYNASTY - SHAH ABBAS I

xxxxxFollowing its defeat at the Battle of Lepanto in 1571 (L1), and the Battle of Tabriz in 1604, the Ottoman Empire was on the decline. Meanwhile, in neighbouring Iran, under its Safavid leader Shah Abbas I, the expansion began by Shah Ismail I (1499 H7) was continued. Having built up a highly professional, standing army, Abbas launched an attack upon the Ottoman Turks. In 1623 he captured Baghdad, together with a large part of eastern Iraq, adding considerably to an empire which stretched from the Tigris to the Indus. He also proved an able leader at home, restoring law and order, encouraging trade with the west, and supporting all cultural activities. Unfortunately, there was also a darker side to his nature. Fearing assassination, he murdered or blinded members of his family, and this left his throne without an heir. As a result his empire began to fall apart. As we shall see, in 1638 (C1) the Turkish leader Murad IV, having improved his army, recaptured Baghdad, and in 1722 (G1) an Afghan invasion overthrew Husayn I and virtually put an end to the Safavid dynasty. Today Abbas is perhaps best remembered for his building of Isfahan, one of the most beautiful cities in the world. 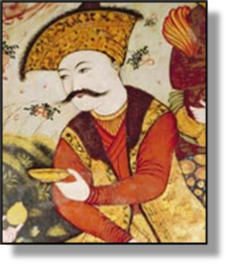 xxxxxAs we have seen, towards the end of the reign of Suleyman the Magnificent, the Ottoman Empire was beginning to show signs of decay, though the final collapse was slow in coming. The bitter struggle between his sons following his death in 1566 led to a breakdown in law and order, and trade and industry went gradually into decline. Towards the end of the century a war with Austria proved again, like the Battle of Lepanto in 1571 (L1), that the Ottoman Turks were by no means invincible. Following his defeat at the Battle of Tabriz in 1604, the Sultan was obliged to recognise the Holy Roman Emperor as an equal, and the annual payments of tribute paid by Austria were discontinued.

xxxxxFurthermore, the Ottoman Empire now came under attack from Iran. In this country a period of expansion was then under way, led by its able leader Shah Abbas I, the greatest of the Safavid rulers. This dynasty, you may recall, had been founded in 1499 (H7) by Shah Ismael I, and by 1512 had united most of Iran under its rule. At the beginning of his reign in 1588, Abbas was obliged to surrender land to the Ottomans, but he spent the next ten years building up a powerful and, more to the point, standing army. Hitherto, armies had been levied in time of need; this was a new concept. Based on European lines, it was composed of three formations - infantry, musketeers and artillerymen -, all paid out of the royal treasury and thus loyal to no one but their Shah.

xxxxxWith this highly disciplined and well-equipped "professional" force, he was able to take the offensive. In 1598 he launched an attack upon the Uzbeks of central Asia, defeating them near Herat, and then started a campaign against the Ottoman Turks. In 1604 he seized Tabriz and, building upon this success, captured Baghdad in 1623, together with a large part of eastern Iraq. By this year his empire extended from the Tigris in the west to the Indus in the east.

xxxxxApart from success on the battlefield, Abbas proved a skilful administrator. The rule of his partially blind father had been weak, but by strong arm tactics, swiftly delivered, he restored law and order and reasserted the power of the monarchy. At the same time, his encouragement of trade and industry brought stability and prosperity. It was during his reign that trade was begun with the English East India Company, and it was by means of such contacts with western Europe that he gave so great an impetus to Iran's export of woven carpets, silk and fine textiles. And it was under his patronage, too, that his country became renowned for the quality of its ceramics, paintings, bookbinding and illuminated manuscripts.

xxxxxSuch high regard for things of artistic beauty, together with a genuine concern for the welfare of his subjects and an unusual degree of religious toleration - Christians, for example, enjoyed freedom of worship - would single Abbas out as a man of rare culture and humanity. Unfortunately, there was a darker side to his nature. He was obsessed with the fear that members of his family were plotting to overthrow him. So powerful was this obsession, that he confined his sons to the harems and later, fearing assassination, had one executed and two blinded. And other members of his family suffered likewise. Both his father and brother were blinded and imprisoned for the same reason. These acts of barbarity left his throne without an heir, and when a successor was eventually appointed he was not up to the task. The empire slipped slowly down from the pinnacle of its power and prestige. As we shall see, the Ottoman Turks, somewhat revitalised by their new leader Murad IV, recaptured Baghdad in 1638 (C1), and the Safavid dynasty was overthrown soon after an Afghan invasion of Iran in 1722 (G1) and the murder of Sultan Husayn I. 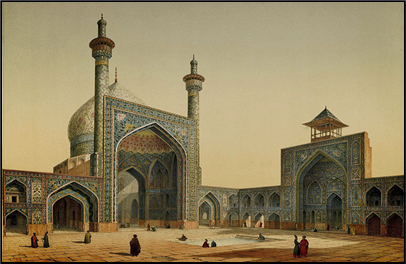 xxxxxWhen referring to the artistic achievements of Abbas I, perhaps his greatest contribution - and his present claim to fame - was the work he accomplished in the lovely city of Isfahan, once known as Aspadana in the ancient land of Media. Having made Isfahan his capital in 1598, he set about its reconstruction. Under his guidance it became one of the most beautiful cities in the world, not a little helped by its high, scenic setting. Amid public gardens, wide squares and spacious boulevards, he created buildings of great architectural splendour, including the sumptuous royal palace and two magnificently-adorned mosques, the Masjid-i Shah, (illustrated) clad with coloured tiles, and the Shayk Lutfullah, renowned for its blue dome. Amid such elegant surroundings, his lavish court became a flourishing cultural centre for visual arts and language.

xxxxxSadly, as noted above, the Afghans invaded Iran a century later, and Isfahan fell into their hands. Although they were expelled from the city seven years later, it never fully recovered from their occupation. However, a number of the most imposing buildings have been restored and can be appreciated today.

xxxxxIncidentally, the name Persia is often used in Western Europe as an alternative to Iran. The term originates from an area of southern Iran once known as Persis. The meaning of this name was gradually extended until it eventually applied to the whole of Iran. In fact, Iranians have always called their country Iran - meaning the "Land of the Aryans" - and in 1935 (and on occasions since) the government of Iran has requested that their country should be called Iran, not Persia. In general this request has been complied with, but Western Europeans in particular still refer to "Persian" carpets and ceramics. 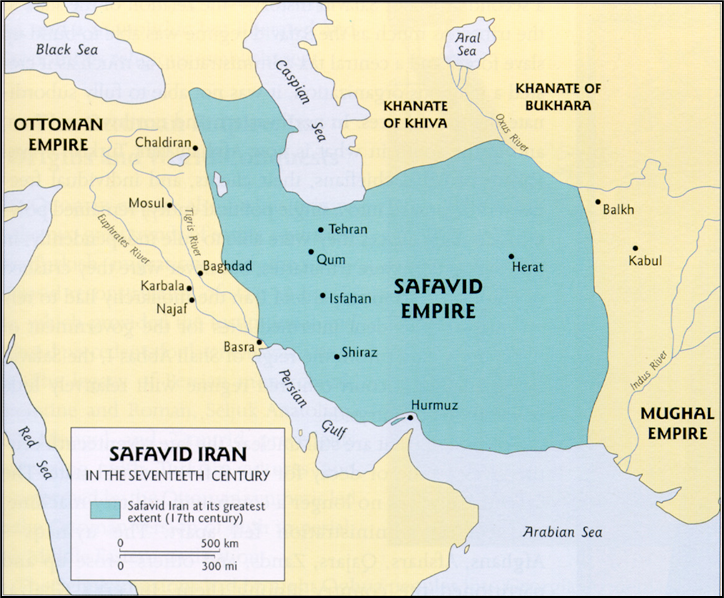