xxxxxAs we have seen, the First Anglo-Dutch War broke out in 1652 (CW). The Dutch enjoyed some early success, but in 1653 they were defeated off Texel and, by the Treaty of Westminster in 1654, were obliged to accept the English Navigation Acts they had fought to remove. In 1664, however, the English occupied New Amsterdam and renamed it New York, and this led to the second conflict. The English won the Battle of Lowestoft in June 1665 but, after this, the Dutch gained the upper hand. In 1667, in the wake of the Great Plague and Great Fire of London, their fleet, commanded by Admiral de Ruyter, set fire to Sheerness and then, sailing up the Thames, destroyed the shipyard at Chatham and a large part of the English fleet. However, despite their success, the Dutch, fearing an invasion by the French, agreed to the Treaty of Breda of 1667. They gained concessions on trade, and retained Guiana and Surinam, but they conceded New Amsterdam (New York) and New Jersey to England. The third war came in 1672! 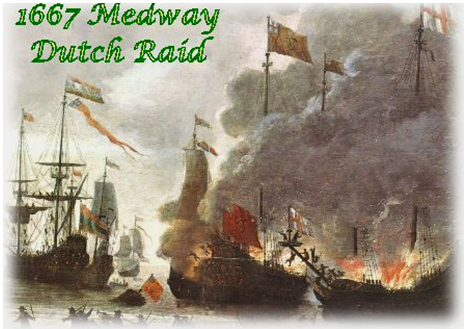 xxxxxAs we have seen, the First Anglo-Dutch War broke out in 1652 (CW). Alarmed at England's introduction of the Navigation Acts - passed the previous year and aimed at restricting Dutch trade with British possessions - the Dutch went on the attack. Under their brilliant admiral Maarten Tromp, they enjoyed some early success against the English, notably in a battle off Dungeness, but in 1653 their fleet was roundly defeated off Texel, and by the Treaty of Westminster, concluded in April 1654, they were obliged to accept the Navigation Acts they had fought so hard to remove.

xxxxxIt was commercial and colonial rivalry which again led to conflict between the two maritime nations, though the king's dislike of the Dutch republicans certainly played a part. The Second Anglo-Dutch War officially began in 1665, but in the previous year, 1664, the English had already captured a slice of New Netherlands in North America and occupied New Amsterdam, renaming it New York. They followed this triumph up with a victory off Lowestoft in June 1665. But from then on the conflict did not go England's way. Most encounters at sea during 1666 were won by the Dutch, whilst on land, England's ally, the principality of Munster, having sent troops into Holland earlier, pulled out when the French entered the war on the side of the Dutch in January 1666. 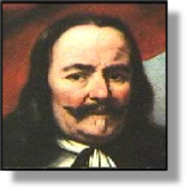 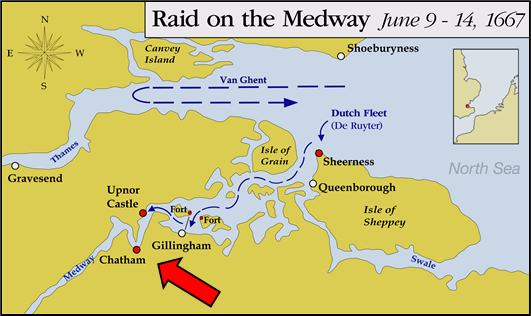 xxxxxAtxhome, too, the English were beset with two major disasters, the Great Plague of 1665 followed by the Great Fire of London the next year. In June 1667, in the wake of these catastrophes, the Dutch fleet under Admiral de Ruyter (illustrated) set fire to Sheerness and, sailing up the Thames and Medway, destroyed the shipyard at Chatham (arrowed on map), and a large part of the English fleet moored there. And as if this were not sufficient humiliation for the English, they returned home, so we are told, with the Royal Charles, the royal barge! Samuel Pepys gave an account of this Dutch "invasion" in his famous diary and later, as secretary to the Navy, was the man largely responsible for restoring England's naval supremacy. And some two centuries later the English writer and poet Rudyard Kipling wrote a poem deploring the state of the English navy at that time.

xxxxxDespite their success at sea, the Dutch, concerned at the French invasion of the Spanish Netherlands, were anxious to bring the war to an end. By the Treaty of Breda of July 1667 they did obtain concessions concerning the English Navigation Acts, gaining permission for their ships to carry goods to England that had come down the River Rhine. On the other hand, in the settlement of colonial territorial disputes, England obtained the New Netherlands (made up of New York and New Jersey), and recovered Antigua, Monserrat and St. Kitts in the West Indies. Holland retained Guiana and Surinam, but abandoned its claim to New Amsterdam, and the French recovered Acadia from the En 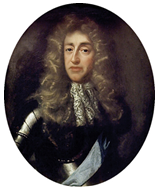 xxxxxIncidentally, the king's brother James, the Duke of York and the future James II, was made lord high admiral at the Restoration and showed a great deal of interest in colonial affairs. It was on his initiative that New Amsterdam was captured from the Dutch in 1664, so it is hardly surprising that it was renamed New York in his honour! Later he commanded the fleet in the opening battles of the war, and he also played a part in the in third Anglo-Dutch war of 1672.