xxxxxThe major cause of the war between Britain and the United States was the declared right of the British to stop and search neutral ships as part of their response to Napoleon’s blockade of European ports. The Americans objected to this, and to the British practice of impressing American sailors into the service of the Royal Navy. They declared war in June 1812, but their attempt to invade Canada met with limited success. However, they did win a number of land encounters against the British - notably the Battle of the Thames in 1813 and the Battle of New Orleans as the war ended - whilst their navy harassed British merchant ships along the coast and scored notable success at battles on Lakes Erie and Champlain. Such rearguard action enabled them to save both New York and Baltimore from enemy occupation. For their part, the British maintained a tight blockade of American ports - causing much economic hardship - and in 1814, landing a force at Chesapeake Bay, won the Battle of Bladensburg and occupied Washington. However, their inability to take Baltimore, and an unsuccessful invasion from Canada, convinced the British government that further conflict was futile. Likewise the U.S., economically stretched, favoured a settlement, and thus a compromise agreement was reached at the Treaty of Ghent in 1814.

xxxxxThe conflict between the United States and Great Britain which started in 1812 was the result of a number of grievances, some of long standing. Since the end of the War of American Independence in 1783, for example, there had been tension between the United States and Britain on a number of counts. Despite the terms of the peace settlement, the British had failed to withdraw from territory along the Great Lakes, and they had openly supported Indians who were anxious to prevent any American expansion westward. And in 1805 there was a serious rift between the two countries over trade with the West Indies.

xxxxxBut the major cause of the war emerged during the Napoleonic Wars, when both the British and the French were engaged in a commercial conflict at sea. As we have seen, Napoleon resorted to a blockade of British goods, closing all continental ports to British shipping by his so-called Continental System, though, at a later stage, he did exclude U.S. trade to Britain. The British, on the other hand, made no such concession. In their response to the French blockade they claimed the right to search all neutral ships trading with Napoleon’s Europe, and to seize any vessel sailing to Europe that did not first call in at a British port and pay a duty. The United States, dependent on selling its foodstuffs, strongly opposed such measures, objecting in particular to having its merchant ships searched by the British. And they were further angered by the British practice of “impressment” whereby they seized deserters and other British citizens from these vessels - along with many American sailors - and forced them to serve in the Royal Navy. 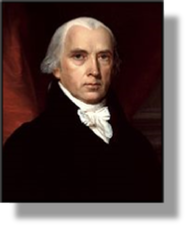 xxxxxAt first, the United States attempted to retaliate by economic measures, triggered off by a serious event in 1807 when the British man-of-war Leopard, prevented from boarding the American frigate Chesapeake, opened fire, disabling the vessel and killing or wounding 23 men. In response, Congress passed an embargo act banning all American ships from foreign trade, but this simply backfired, badly affecting the American economy. And when other such measures failed, a group of “War Hawks” in Congress, concerned with national honour as much as with economic survival, demanded war against Great Britain, arguing that an invasion of Canada would force the British to change their policy at sea, and end their support for hostile Indians on land. In June 1812, after Britain had again refused to repeal their Orders in Council of 1807, President James Madison (1751-1836 (illustrated) signed a declaration of war against Great Britain, agreed in Congress despite hefty opposition from the Federalists. 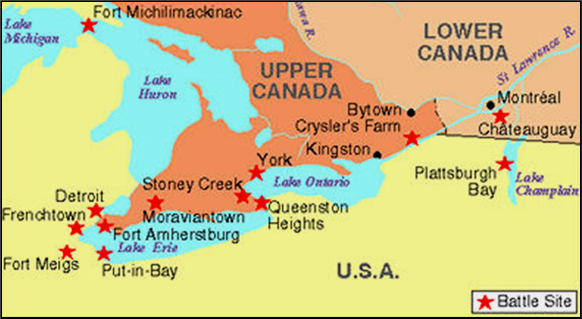 xxxxxInxthe campaigns that followed in 1812 and 1813 the American forces - ill-prepared for war - made no headway in their proposed conquest of Canada. They were forced to surrender Detroit and Fort Michilmackina in August 1812, lost the Battle of Queenston Heights, near Niagara, two months later, and their offensive along Lake Champlain petered out in the November. In 1813 it was much the same story. No advance could be made at Niagara and, following the taking and burning of York (Toronto), an ambitious plan to capture Montreal by a combined land and river attack ended in failure at the end of the year. Only in the west was success achieved. Here the Americans captured an entire British squadron on Lake Erie in the September and, forcing the British to retreat, defeated them and their Indian allies at the Battle of the Thames (Moraviantown) the following month. An added bonus in this engagement was the killing of Tecumseh, the Shawnee chief who, with the support of the British, had repeatedly led raids across the north-west frontier and had even engaged the Americans in a pitched battle at Tippecanoe in November 1811.

xxxxxAt sea, it was a period of mixed fortunes for the Americans. They won a series of one-to-one encounters against British frigates, notably the contest between the Constitution and the Guerrière in 1812, and American privateers, as in the days of the American War of Independence, continually harassed and captured British shipping. However, the strict blockade of American ports enforced by the Royal Navy caused serious economic hardship to a country which was fast becoming insolvent. 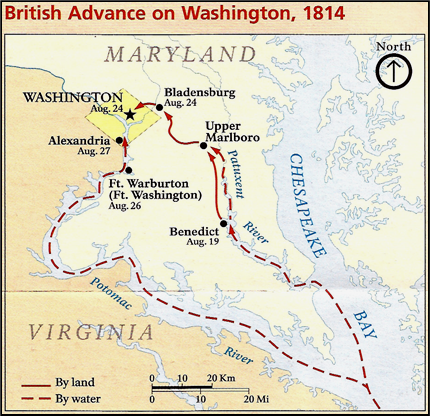 xxxxxBy 1814 the United States was in greater danger, but both its army and navy faced up well to the challenge. Following the defeat of Napoleon at the Battle of the Nations, Britain was able to commit its battle-hardened troops and a much larger number of ships to the American campaign. Nevertheless British attacks at Chippoewa and Lundy’s Lane, near Niagara, were repulsed. Further south, the British fared better at first. An army of 35,000 troops, transported from Bermuda, were landed in Chesapeake Bay and meeting only light resistance, marched inland. After defeating a larger force at the Battle of Bladensburg, they marched into Washington in the August and burnt down a number of the public buildings, including the White House and the Capitol. President Madison having made his escape, an attack was launched on Baltimore, but faced with stiff resistance from Fort McHenry, it failed, and the British troops were forced to pull back. Then in September New York was saved from a force of some 10,000 veteran fighters which had advanced into the United States from Montreal. An American naval force under the command of Captain Thomas Macdonough destroyed a British flotilla at the Battle of Lake Champlain (in Plattsburg Bay) and the invaders, fearing that their supply line would be cut, retreated back to Canada.

xxxxxThis defeat, plus the failure to take Baltimore, persuaded the British prime minister, Lord Liverpool, that peace was a sensible option The government had no wish to become bogged down in a long futile struggle far from home. The U.S. government likewise, financially crippled and anxious to keep the union in being, was quite willing to end the conflict. When negotiations opened, both countries made unrealistic demands, but these were soon abandoned. Both sides recognised that the conflict had been indecisive. 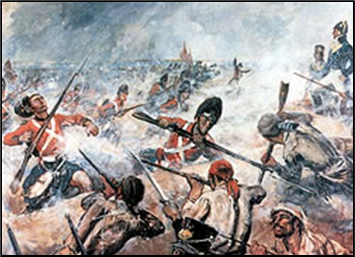 xxxxxThe Treaty of Ghent, signed on Christmas Eve 1814, produced a compromise, virtually restoring the pre-war situation, but bringing an end to Britain’s illegal practices on the high seas. For Great Britain the peace agreement did not come too soon. Beforexnews of the peace settlement had reached the southern parts of the United States, the British, having landed at New Orleans to gain access to the Mississippi valley, were overwhelmingly defeated by General Andrew Jackson (1767-1845) in January 1815 (illustrated). This result would probably have made little or no difference to the peace terms already agreed, but for the United States it was a much needed boost to national pride, and a welcome strengthening of the Union - forestalling as it did a powerful separatist movement which was active at this time in New England. The conflict had proved, if nothing else, that the new nation had shown the ability to withstand the might of Britain single-handed.

xxxxxThroughout the war the British made extensive use of Congreve rockets, employed as we have seen to devastating effect upon the port of Copenhagen in 1807. At the Battle of Bladensburg, for example, in August 1814, rocket brigades played a major part in overcoming American resistance - thereby opening the way to Washington - , and the following month they were fired from a specially designed ship, the Erebus, and a flotilla of small boats during the bombardment of Fort McHenry, a stronghold defending the harbour at Baltimore.

xxxxxThexrockets used against Fort McHenry are the ones referred to by the American poet and lawyer Francis Scott Key (1779-1843) when he wrote his poem The Defence of Fort McHenry on the 14th September 1814. He was on board a British frigate to arrange for the release of a prisoner at that time, and witnessed the heavy rocket bombardment first hand. Thexsight of the union flag still flying over the fort the following morning inspired him to write his poem. Renamed The Star Spangled Banner, it was later set to the tune of the drinking song To Anacreon in Heaven and, becoming very popular, was adopted by Congress as the national anthem in March 1931. The first verse says it all:

The Treaty of Ghent

xxxxxIncidentally, thexBattle of Lake Erie, which took place in and around Put-in-Bay in September 1813, was a significant naval encounter and needs to be mentioned. The “Hero of Lake Erie” was the American commander Oliver Hazard Perry. He had the distinction of presiding over the first capitulation of an entire British Squadron. In reporting back news of the British surrender he wrote: “We have met the enemy and they are ours”. As the result of this engagement the British invasion force was made to retreat, and he was promoted to the rank of captain. ……

xxxxx…… It was during the War of 1812 that the nickname Uncle Sam (derived from the initials U.S.) first came to be used, employed initially in a derogatory sense by those Americans opposing the war. He first appeared as a cartoon figure, dressed in the stars and stripes, in 1832. Later, as a character sporting long white hair and a short beard, and wearing a high hat and tails, he became widely accepted, especially in the First and Second World Wars, but he was not adopted by Congress as the national symbol until 1961. ……

xxxxx…… In 1814, when British troops captured Washington and set fire to the White House, the president’s wife, Dolly Madison, stayed back long enough to rescue the original draft of the American Declaration of Independence, and the famous painting of George Washington by the American artist Gilbert Stuart. ……

xxxxx…… Before the Battle of New Orleans in January 1815 (fought after the peace settlement in fact) the nuns in the city’s Ursuline Convent spent the night praying for victory, and the prioress vowed to have a Mass of Thanksgiving sung annually should the British be defeated. The vow has been faithfully kept throughout the years!

Oh Say, can you see, by the dawn’s early light,

What so proudly we hailed at the twilight’s last gleaming?

Whose broad stripes and bright stars, through the perilous fight,

O’er the ramparts we watched were so gallantly streaming?

And the rockets’ red glare, the bombs bursting in air,

Gave proof through the night that our flag was still there.

Oh, say, does that star-spangled banner yet wave

O’er the land of the free and the home of the brave? 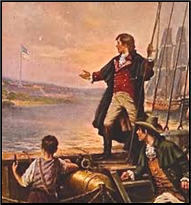 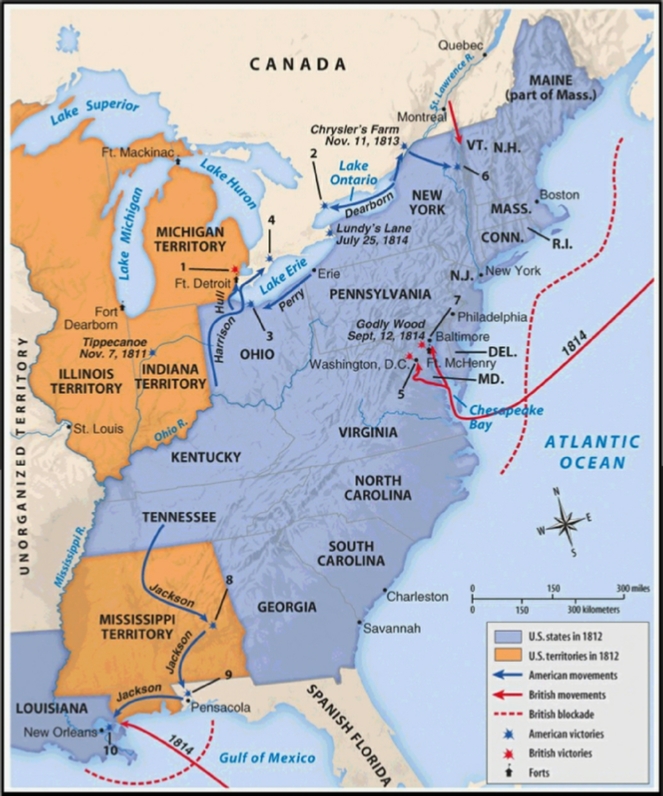 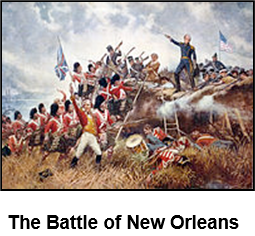 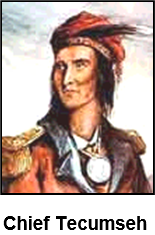 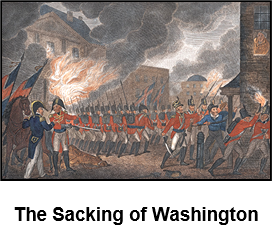